Fern Annabelle Hinse shares a valuable secret about life.  It involves the emptiness and fullness of changing times.  Fern’s Scientific Memoir charts her odyssey of study through mathematics, science and psychology after a near-fatal car crash that shattered her psyche and her body.  By accepting the challenges that she met, Fern began an individual fight to answer questions about time.  She tackled many inconsistencies that were presented as “normal” to provide valuable information that was earlier “unidentified.”

A dance of darkness and sparkling light beams from a diamond in the same way that time’s parallel dances to a simple tune of rise and fall.  When it rises, it sparkles and shows its life.  When it falls, the sparkles die and the light goes out.  However, there is a secret balance inside this beaming parallel.  Whatever rises will fall, and whatever falls, will rise.  Both sides are trans-positioned beside each other – so both sides survive and win.

When I was in a state of “no-emotion,” and attempting to heal my broken life, I pursued scientific academia and discovered the changing mysteries. I wrote Time’s Secret Parallel because it freed me; I could explore the universal mysteries that took place right alongside of me.  I found a passageway-through time-for all living, dying, body, mind, and soul.  I discovered that we are all sparkling diamonds and every one of us wants to show that we are worthy and identify that we are free.

As I realigned my emotions, I wrote my scientific memoir, and tell of my sparkling ingenious idea that is built right into the parallel.  It is a simple process that clearly shows the unexpected directions of rise and fall – as they beam in and out of Time’s Secret Parallel. 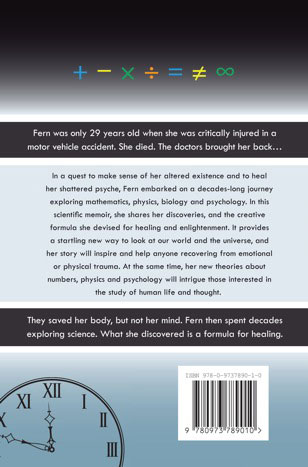